The 'solar' in solarpunk is both a literal reference to renewable energy and a metaphor for decentralized, locally controlled, but interconnected resilience.

by Gabriel Stein
Going solar
This Pub is a Commentary on 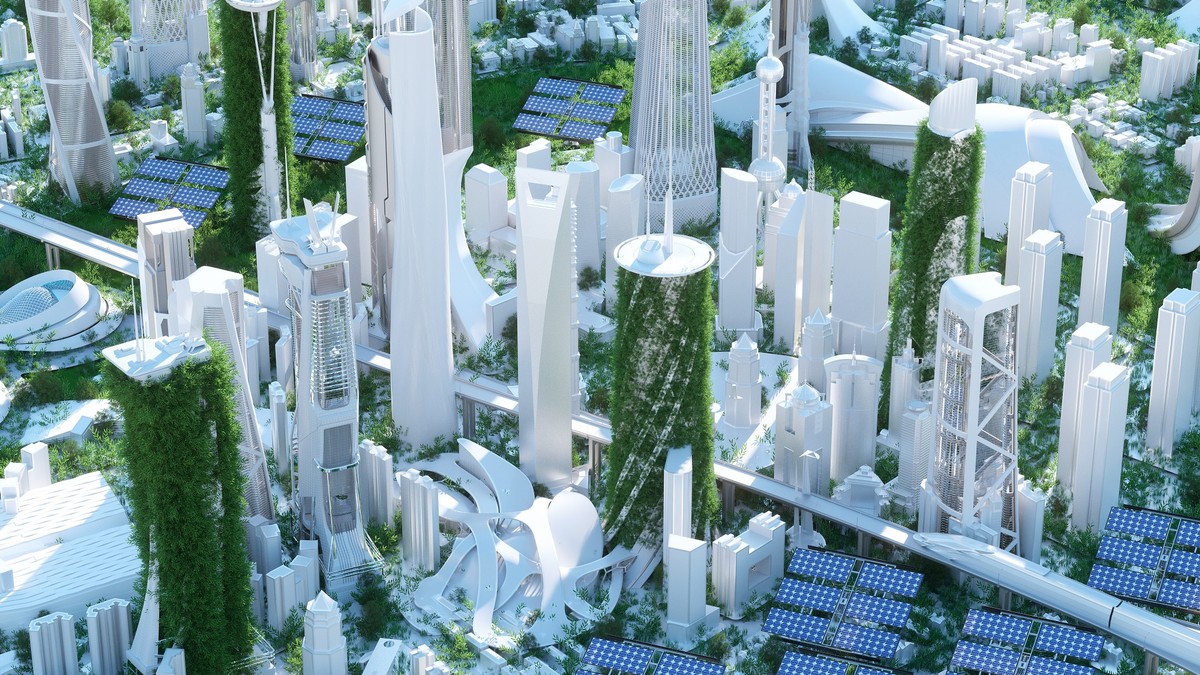 Solarpunk Is Not About Pretty Aesthetics. It's About the End of Capitalism

Late last week I came across solarpunk, the emerging sci-fi sub-genre/art movement/sociopolitical movement dedicated to imagining hopeful near-term climate futures, via this Motherboard article. Naturally, many of my friends had become familiar with it years ago (and why didn’t you tell me?!), often via renderings of futuristic, plant-filled cityscapes. For that reason, most believed it to be mostly an art movement.

In the intervening years, it seems to have taken on more heft. As the Motherboard piece points out, more literature, magazines, and online communities are beginning to emerge, and in the surest sign of mainstream breakthrough potential, the solarpunk aesthetic and ethos was recently borrowed/coopted in a Chobani ad that, as one friend put it, is the Studio Ghibli movie set in 2150 North America you didn’t know you needed.

The media traction is certainly heartening, and with any luck a solarpunk work will soon reach mainstream pop culture appeal. But it was this quote, from solarpunk Jay Springett, that had me most excited about the movement’s potential:

“Solarpunk is more concerned with delivering the practical things that you can do on route to a better world, rather than the gestural things,” Springett said. “You can't LARP Solarpunk because LARPing Solarpunk is going out and planting a garden.”

Or, taking a more positive view of the power of fandom, solarpunk is one of the few genres where your LARPing has an immediate real-world impact.

If there is a solarpunk urtext, it is Adam Flynn’s 2014 Solarpunk: Notes toward a manifesto. In it, he explains the movement in two taught paragraphs worth reading in full (emphasis his):

Solarpunk is about finding ways to make life more wonderful for us right now, and more importantly for the generations that follow us – i.e., extending human life at the species level, rather than individually. Our future must involve repurposing and creating new things from what we already have (instead of 20th century “destroy it all and build something completely different” modernism). Our futurism is not nihilistic like cyberpunk and it avoids steampunk’s potentially quasi-reactionary tendencies: it is about ingenuity, generativity, independence, and community.

And yes, there’s a -punk there, and not just because it’s become a trendy suffix. There’s an oppositional quality to solarpunk, but it’s an opposition that begins with infrastructure as a form of resistance. We’re already seeing it in the struggles of public utilities to deal with the explosion in rooftop solar. “Dealing with infrastructure is a protection against being robbed of one’s self-determination,” said Chokwe Lumumba, the late mayor of Jackson, MS, and he was right. Certainly there are good reasons to have a grid, and we don’t want it to rot away, but one of the healthy things about local resilience is that it puts you in a much better bargaining position against the people who might want to shut you off (We’re looking at you, Detroit).

There is so much to love here, but I want to draw out one simple thought that it took me a few days of exposure to the movement to understand fully. Once it sunk in, it was clear as day that this is what people were getting at all along, but I wish I had come across it earlier, in plainer terms (ah, here’s one example via an unfortunately dead link, let me know if there are others). So here goes:

In this way, any action that helps build a meaningfully resilient community is solarpunk. “Meaningfully” in that phrase is important, because it acknowledges that there are unsustainable ways to build temporary resilience, and those acts are not solarpunk. But this metaphorical interpretation really helps me tie the movement’s aesthetics to its philosophies and understand it as more active than an art movement or sub-genre. It’s why actions like helping your friend get into therapy is solarpunk; why getting involved in local government is solarpunk; why your community fridge is solarpunk, even if it has to be powered by a gas generator for now.

So, let’s get solar and go LARP.